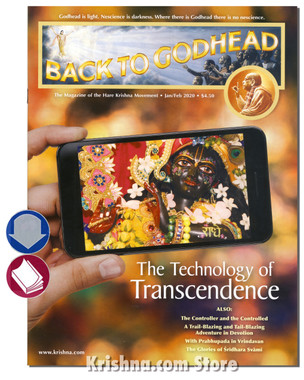 Founder's Lecture: The Controller and the Controlled, by His Divine Grace A. C. Bhaktivedanta Swami Prabhupada

A Trail-Blazing and Tail-Blazing Adventure in Devotion, by Chaitanya Charana Dasa

Hanuman’s burning of Lanka was just one of his many exploits during his reconnaissance mission there.

The Technology of Transcendence, by Dvijamani Gaura Dasa

Technological development should be balanced with a healthy spirit of service to God and respect for His creation.

The Anatomy of Autonomy, by Gauranga Darshana Dasa

In our superior-subordinate relationships, we can benefit greatly by looking to examples in the Vedic scriptures.

Transcendental Cooperation or “My Way or the Highway”? by Sarvabhauma Dasa

Some thoughts on fulfilling Srila Prabhupada’s request to his followers to cooperate after his departure.

With Prabhupada in Vrindavan, by Shyamasundar das

After a hugely successful program in Delhi, Srila Prabhupada introduces his young Western disciples to the spiritual wonders of Krishna’s eternal home.

In Krishna consciousness we can be empowered, not by demanding empowerment, but by attracting the mercy of the Supreme Lord or His representative.

To those exposed to Krishna consciousness, the futility of coping with aging through material adjustments alone is perfectly obvious.

The Glories of Sridhara Swami: A Quick Comment on a Crafty Commentator, by Satyaraja Dasa

Departments: Letters, A Pause for Prayer, Calendar, Srimad-Bhagavatam: The Authority of Great Personalities, Srila Prabhupada Speaks Out: “People Have No Idea About Liberation,” Hare Krishna Maha-Mantra, From the Editor: The Most Famous Person, Vedic Thoughts.

This is the digital download PDF version of BTG Vol. 54, No. 1. Includes the usual departments, such as Letters, Srila Prabhupada Speaks Out, Calendar, and From the Editor.