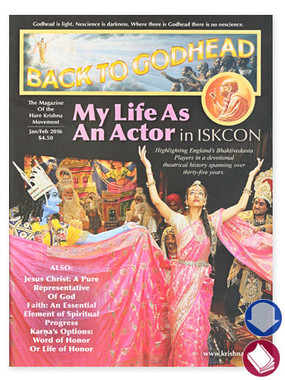 This is the PDF edition of the Jan/Feb 2016 issue of BTG, a 64 page magazine that focuses on Krishna consciousness. Back to Godhead is a magazine offering articles and information on Krishna consciousness (or bhakti-yoga). The magazine is published six time each year, and is available here per issue, or as a subscription. Back to Godhead is also available online at: btg.krishna.com

Founder's Lecture: Try to Hear About Krishna, by Srila Prabhupada

His Mission's Roots, by Suresvara Dasa

Key meetings and correspondence with his spiritual master forged in Prabhupada's heart an unshakeable determination to carry out his guru's order.

Chariot of the Soul: A Metaphor to Distinguish Body from Self,  by Satyaraja Dasa

The image of runaway horses yoked to a chariot illustrates the danger of an uncontrolled mind.

A strong faith in the reality of Krishna consciousness will propel us steadily forward on the road to perfection.

My Life As an Actor in ISKCON, by Jaya Krsna Dasa

A devotee in the UK reflects on his experiences in presenting Krishna Consciousness through the medium of drama.

One of the first books Srila Prabhupada presented is an important Vedic Upanisad whose focus is clearly the Supreme Personality of Godhead.

Karna's Options: Word of Honor or Life of Honor, by Caitanya Carana Dasa

A look at the virtues and vices of one f the Mahabharata's most intriguing characters.

This issue is Vol. 50, No. 1.  Includes the usual departments, such as Letters, Srila Prabhupada Speaks Out, Calendar, and Centers Around the World.

This is the PDF edition of the Jan/Feb 2016 issue of BTG, a 64 page magazine that focuses on Krishna consciousness.