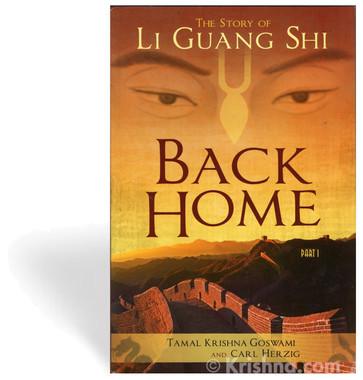 Back Home, Part 1: The Story of Li Guang Shi

“Back Home” is a sequel to Tamal Krishna Goswami’s 1994 novel, Yoga for the 21st Century (Yoga for the New Millenium). Based on Maharaja’s experiences in China and co-written with his brother, Kalachandji das (Carl Herzig), “Back Home” rejoins PhD chemist and AIDS researcher Li Guang Shi, who has returned to Beijing from his graduate studies in New York.

Guang Shi receives a visit from his American friends, led by his spiritual guide, Sanatan Swami, who gives a series of talks on Srimad-Bhagavatam, relating the Vedic and Chinese philosophical traditions.

Joined by a diverse cast of Beijingers – including a traditional Chinese doctor and his offbeat assistant, a hotel receptionist who is raising an infant she found abandoned in the forest, an elderly Taoist master, and an ambitious young entrepreneur and his fashion-model girlfriend-Guang Shi’s friends tour the city while navigating their
own spiritual paths, one absorbed by the sacred wisdom of Sanskrit texts, one tempted by the attractions of Beijing’s night life, another lured by the enigmatic aphorisms of the Taoist monk.

In the meantime, Guang Shi, feeling encumbered by his professional responsibilities, becomes increasingly aware that the real cure for what ails humanity will be found not in the labs of his institute, but in the Vedic precepts of ancient India.

“Back Home” engages us with stories and lessons from the Vedas as we follow Guang Shi and his friends’ struggles to meet the challenges and avoid the snares of contemporary material – and ethereal – life.