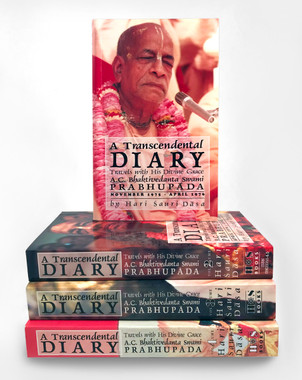 Four Volume Set - on sale for a limited time only, while supplies last.

The size of each book is approximately 8.5" x 5.5".  These books were printed in intervals at different times, not originally as a set, so there is some slight variance (less than 3 millimeters or 1/16 inch) in the height between books, and the paper color varies slightly, from more cream colored in some, and more white in other volumes. Printed in India between 1992 and 1996.

There is a fifth volume not included in this set, because the softbound version is out of print, and the hardbound is almost out of print (less than 10 copies left in our warehouse.)  You may still be able to purchase Volume 5, hardbound, separately here at the Krishna.com Store, while supplies last, or find it used on Amazon.